Nearly 25 years ago, the world made a promise to its children - that we would do everything in our power to protect and promote their rights – to survive and thrive, to learn and grow, to make their voices heard and to reach their full potential. 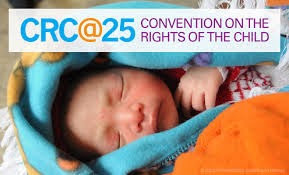 These rights of children were guaranteed by the Convention on the Rights of the Child (CRC), adopted by the United Nations General Assembly on 20th November 1989, which changed the way children are viewed and treated – as human beings with a distinct set of rights, instead of as passive objects of care and charity. The CRC is the most widely ratified international human rights treaty in the history of the world. India became a signatory to this convention in 1992
There is much to celebrate as we approach the 25th anniversary of the CRC - CRC@25 – in India: from declining infant mortality to rising school enrolment. But this historic milestone must also serve as an urgent reminder that our work is far from finished. Progress, unfortunately, has not reached every child and in our country there are still children who officially do not exist because they have no birth certificates; children who go to sleep hungry; children who do not go to school; children who endure abuse, sexual assault; some neglected, uncared for and unloved; some forced to work; some forced to marry while they are still children, while some are yet to enjoy their full rights on par with their peers.

The CRC@25 is a great opportunity to pay tribute to the growing recognition of children as right-holders, celebrate the milestones achieved on their behalf, and draw attention to the road ahead in ensuring that all children are given the best chance in life to reach their highest potential.
In the background of Children’s Nov. 14th and CRC@25 Karnataka Child Rights Observatory (KCRO) along with its member organisations, Karnataka State Legislators Forum for Child Rights and UNICEF with Karnataka State Commission for Protection of Child Rights and Artville School of Art is organising various programmes and activities in Bengaluru from 10th to 19th of Nov. 2014.