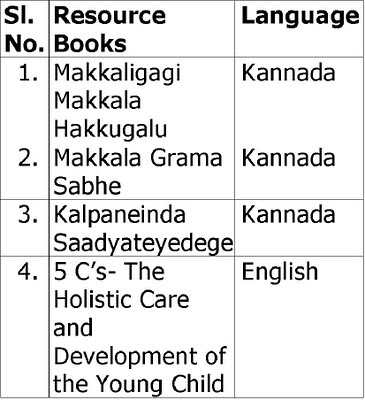 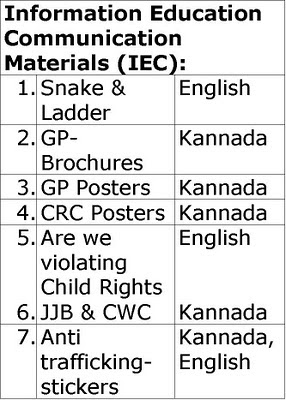 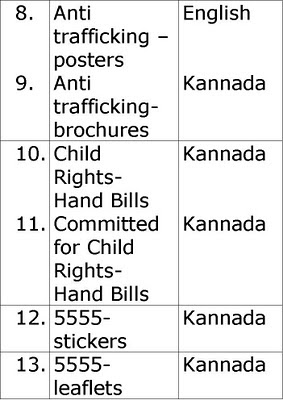 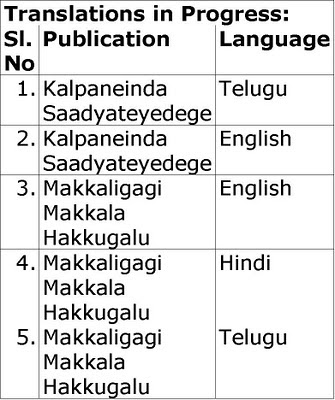 Email ThisBlogThis!Share to TwitterShare to FacebookShare to Pinterest
Labels: Publications

20 YEARS OF UNCRC AND CHILDREN OF KARNATAKA

Organised by: Karnataka Child Rights Observatory (KCRO) with the support of UNICEF

Twenty years ago the UN adopted the Convention on the Rights of the Child (CRC). Within a short period country after country committed itself to uphold the rights of children. India also became a signatory to the CRC in the year 1992 and the Convention became an instrument of support to everyone - Government, legislators, NGOs, media, judiciary, etc., to advocate for the cause of children.
In the last two decades in spite of several shortcomings, various stake holders have taken positive measures towards the implementation of CRC.

Against this background, KCRO held a state level meet to commemorate the 20 years of CRC and to take a deeper look at the situation of children in Karnataka in the presence of representatives from all the major sectors – legislative, judiciary, administration, media, 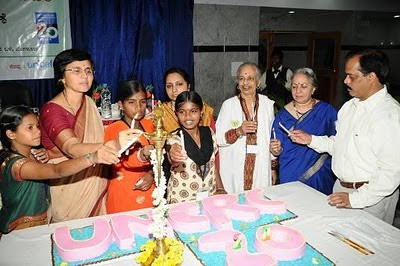 NGOs and the private sector.

November 20th began with an inaugural address by Ms. Nina Nayak, Chairperson of Karnataka State Commission for the Protection of Child Rights (KSCPCR). This was followed by presentations on Survival, Protection, Development and Participatory Rights of the child by Dr. Roopa Devadasan, Mr. Lakshapathi, Dr. Vasavi and Mr. Renni D’Souza respectively. 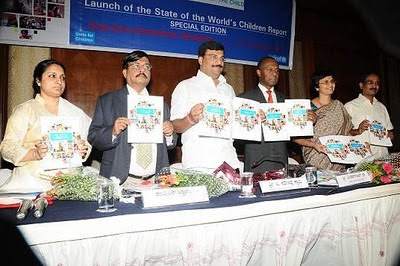 November 21st saw the release of the State of the World’s Children- Special Edition by Mr. Narendra Swamy, Minister for Department of Women and Child Development, along with Mr. Michel Saint-Lot, UNICEF State Representative for Andhra Pradesh and Karnataka, Dr. D.S. Ashwath, Secretary to Government of Karnataka, Women and Child Development and Ms. Nina. P.Nayak, Chairperson of the Karnataka State Commission for Protection of Child Rights.

The event saw the participation of 179 people from NGOs, Government, individuals and media.

Many recommendations and suggestions emerged from the diverse group on effectively working towards child rights and strengthening the partnerships between all stakeholders.

About Karnataka Child Rights Observatory: KCRO is a resource centre and an advocate for child rights with partners from across the state. In the recent past KCRO has conducted several independent studies with active participation of its member organizations about the situation of children in the state. The alliance has also worked with legislators, NGOs, media and the private sector to raise awareness about children. KCRO is supported by UNICEF for its various ventures.

For a detailed report on the event or to join the KCRO network, please contact us at 080-41138285 or email us on kcronodalcrt@gmail.com
Posted by crtindia at Thursday, December 17, 2009 1 comment:

CRT, in partnership with Bijapur and Shimoga Universities, is training post-graduate students from various departments on Child Rights.

4 consultations were to be held in an academic year in each university.

Bijapur University: 3 consultations have been completed in the university for students from women’s studies, Social work, sociology, kannada, economics and political science. About 500 students have been trained through these workshops which are held over two days.

One consultation remains to be completed.

Shimoga University: 1 consultation has been held with 3 more in the anvil. All four consultations are for the Social Work Department students.

Methodology: The workshops are designed to be interactive and participatory methods like games and activities are used extensively. The participants are encouraged to think and arrive at conclusions on their own with the aid of some theoretical inputs from us.
An assignment is also given at the end of day 1 on which the students themselves make a presentation on day 2.

CRT believes that sensitising students and youth is vital towards realizing child rights. Many of these students, especially from Social Work, end up working in the development sector. Hence, orienting them on the importance of child rights becomes paramount.

For the many students who may not make a career of child rights, their partnership as civil society members in ensuring rights reach all children is crucial. An apt example in this regard would be the effort on the part of the some of the students who tried preventing a child marriage post the workshop.

The youngsters’ enthusiasm and sensitivity through these workshops has been extremely heartening to see. Many students have considered doing their thesis/dissertation on a child rights related topic.

With the encouraging response from the students and the faculty at these universities, we hope to continue this initiative with many more college and university students.

Posted by crtindia at Thursday, December 17, 2009 No comments:

TOWARDS A CHILD-FRIENDLY BANGALORE!

That the BBMP elections were announced and were subsequently postponed again and again is an issue everyone is well aware of. In the process, projects envisioned for the citizens’ welfare are being impacted negatively with no one to spearhead them. The effect of this is felt the most by children, who are amongst the voiceless citizens of the city. Making the city child-friendly requires that projects are well planned keeping the demands of children in mind. 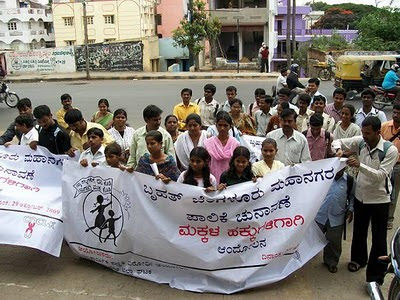 Children’s population in Bangalore stands at 20 lakhs. While they may have no direct say in the election process, they have a direct influence on their parents who exercise their children’s right to express through their own votes.

On behalf of the member organisations of CACL-Bangalore chapter, a pre-election advocacy campaign was undertaken to urge the political parties and contesting candidates to recognize this and place the demands of these young citizens of Bangalore in their manifestos. 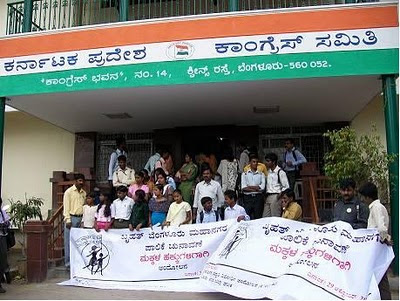 With a comprehensive list of demands in place, the CACL team (APD, SICHREM, Sathi, APSA, Paraspara, ILP, ILO, CDF, CRT, Anantha Seva Trust, CPU, MSW students, BRIDGE network, Gilgal Foundation, TRUST Network, Mythri Sarva Seva Samithi and volunteers) along with media persons, visited the party offices of Congress, Lok Satta, BSP and JD(S) on 29th October to hand over these demands. Due to political in-fighting in BJP, no party representative was available to receive them and we were advised to meet them on a later date.

All the parties pledged their support and assured that they would look into the demands.

With the BBMP elections now being announced to be held in January, the team will be following up with the parties to see if these demands have been included in their manifestos.

Along with including the demands, the expectation is that the emerging elected party follows through on them and is held accountable to the promises made.

*Campaign Against Child Labour (CACL): is a network of NGOs working for the development of children and upholding child rights across the country.

For a complete list of the demands made or a detailed report of the visit to the party offices, please contact Child Rights Trust (CACL Bangalore convener)
Email: crtindia@yahoo.co.in Ph: 080-41138285
Posted by crtindia at Thursday, December 17, 2009 2 comments: