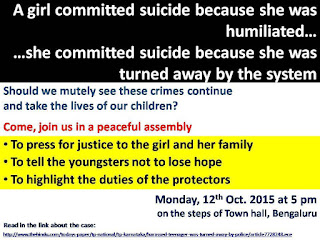 Do join us in a  awareness programme to seek justice to the Girl (who killed herself after being abused by few men at her home in Chikkajala, Bengaluru ) and her family, and also to boost the morale of the youngsters by giving information about the systems that are existing for the well being of Children, on   12th October at 5 pm near Town hall.

Child Rights trust in association with Sparsha trust, BASCO and APSA has initiated this programme to spread a word among the public and specially to Children not to take extreme steps just because one is humiliated by the abusers and denied the support from the system as we have many child friendly systems which needs to be taped upon.  In this regard, through this programme we intend to create awareness on the systems that are specifically meant for Children and their well being. At the same time we are also urging the system to respond well with those situations when Children are in problems and strengthen the faith about the system among the younger generation.