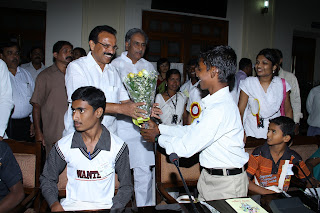 Children voice their demands loud and clear to CM
It is not every day that one gets to see Karnataka Chief Minister D.V. Sadananda Gowda answering a series of questions posed by none other than children. However, this is exactly what happened on November 15, at Conference Hall No. 333, Vidhana Soudha in Bangalore, when the Chief Minister was grilled by around 80-odd-children from different parts of Karnataka, on various issues pertaining to child rights. Along with the chief minister, several members of the legislative assembly (MLAs) and members of the legislative council (MLCs) participated in the discussion, where child representatives took the centre stage. Along with the CM, MLAs Sri Manohar Maski, Sri Ne. La. Narendrababu, Sri Basavaraja Horatti, Smt. Vimala Gowda, Sri Mukhya Mantri Chandru, Sri Harris and other legislative assembly and legislative council members were also present. UNICEF Hyderabad representatives Dr. Yogendra Mathur, Sri Soni Kutty George and Smt. Nina Nayak, Chairperson of the Karnataka State Commission for the Protection of Child Rights (KSCPCR), members of the NGOs and media were also present. The CM and his colleagues signed their commitment to the Child Rights Commitment poster and inaugurated the programme.

The event was part of the state-level Children's Parliament hosted at Vidhana Soudha for almost two hours—11.00 am to 1.00pm. The unique attempt to help children raise their issues directly in front of highest policy makers was a collective attempt by Karnataka State Legislators’ Forum for Child Rights, Karnataka Child Rights Observatory (KCRO) and supported by United Nations Children’s Fund (UNICEF), Hyderabad. For the first time in the state, a chief minister had held consultation with the children directly and listened to their problems in the Vidhana Soudha, the epicenter of power.

Be it the low-quality food supplied at anganwadi centres, or the discrimination faced by HIV-positive children, the young participants at the session minced no words in bringing forth issues related to school-going children across Karnataka. The other topics which figured during the interaction between the Chief Minister and the children included lack of infrastructural facilities in schools, lack of good quality teachers in schools, problems faced by disabled children, stray dog menace, poor health care facilities, education of migrated children, trafficking, female foeticide, lack of transportation facilities and ban on liquor, to name a few.

If 14-year-old Mohammed Anas, a student of Shivarama Karanth High School in Putthur complained of the huge amount of corruption involved in the supply of food to anganwadi centres by highlighting the involvement of teachers in selling off food meant for children, then another teenager expressed his plight at being thrown out of his school, after he was found to be HIV positive.

The courage and conviction with which the children addressed questions to the Chief Minister left everyone baffled. Right from politicians, bureaucrats to activists, everyone present at the event praised the children for their in-depth knowledge of ground realities, and passion to solve their problems.

A patient Chief Minister, after listening to the children assured them that their issues would be addressed immediately. He also asked the children to write to him directly whenever they faced any kind of discrimination or violations of their rights.

As part of the Children's Parliament, young participants were provided a day-long time on 14th November to interact among themselves and prioritise their issues to be discussed with the CM. This coincided with Children’s Day celebration, observed across the country. Many of the children who participated in the state level children’s parliament felt that the momentum now created should not die down with this particular programme, rather the process of children’s representatives meeting the Chief Minister and other cabinet ministers with their demands should become a regular feature every year.

this blog really hepls the kids and it providing awful piece of information, i have read atleast 13 posts of yours by now, and let me tell you, your blog gives the best and the most interesting information. This is just the kind of information that i had been looking for, i'm already your rss reader now and i would regularly watch out for the new posts, once again hats off to you! Thanks a million once again, Regards, obiee training in hyderebad